sculptures made from thousands of toothpicks based on the orbital paths of planets and sacred geometry.
​Hence the secret to my website name. 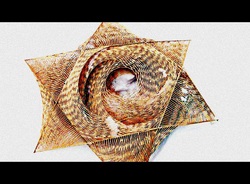 This is Six Million Pod which is basically a sculptural exploration in which each toothpick represents one Jew killed during World War 2.


Set as a memorial to my family and that of all the Jews from WW2 who lost their lives and to the families of the survivors. I wanted to explore individualism through different toothpicks and also wanted to be able to "touch" an abstract number so I could better understand what that meant in terms of human loss.

Toothpicks were mostly donated to me for this project to which I documented each donation made and who contributed:
Donations already made.
Still unfinished, this sculpture waits for a time when I can fund the completion. Until then please keep up to date via this sculptures Facebook page Six Million Pod